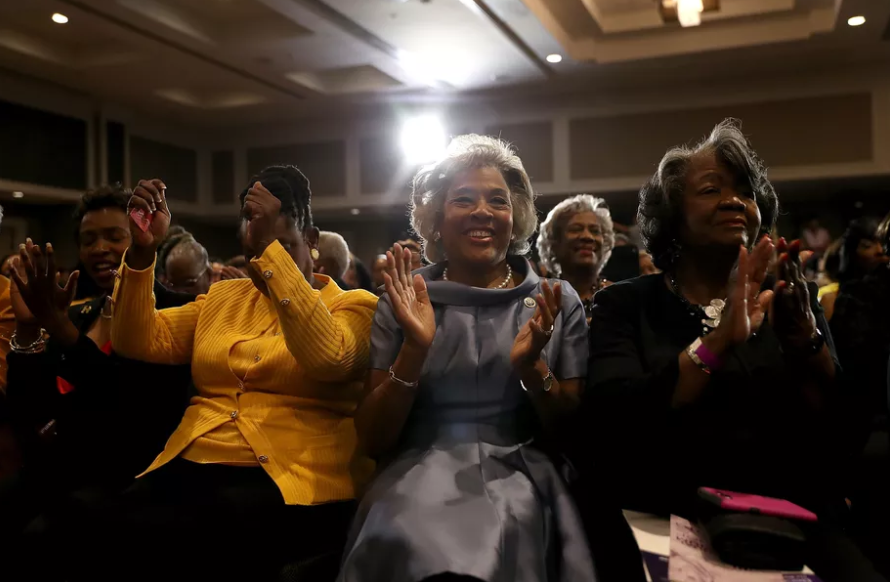 A few weeks ago, on a brisk December afternoon, a group of policy advocates, members of Congress, and interested citizens gathered on Capitol Hill in Washington, DC for a policy discussion. On its face, this doesn’t sound like anything special, but there was something unique about the majority of the people in the room that day: They were mostly black women.

The mood was jubilant, largely because the night prior, Democrat Doug Jones bestedRepublican Roy Moore in the Alabama special election, ending a 25-year losing streak for Democratic Senate candidates in the state. Exit polls showed that Jones’s victory was largely due to the high turnout of black voters, especially black women.

The event began as the results from the election were still trending on Twitter, with streams of praise for #BlackWomen’s performance in the Alabama contest. “What if we just let black women run everything?” read one popular tweet.

National political figures also weighed in. “Let me be clear: We won in Alabama and Virginia because #BlackWomen led us to victory,” Democratic National Committee Chairman Tom Perez noted. “Black women are the backbone of the Democratic Party, and we can’t take that for granted. Period.”

The narrative that black women “saved America” by blocking Roy Moore from the Senatewith their votes was picked up in media circles, with political strategists and journalists alike swiftly moving to dissect what the Alabama performance might mean for political contests in 2018 and 2020.

The December event on black women’s political influence, hosted by the Congressional Caucus on Black Women and Girls, was timely given the major win in Alabama — but celebrating the election results wasn’t the point of the gathering. After all, in past victories, black women have seen the policy issues they supported most fall down the list.

“It’s one thing to acknowledge the centrality of African-American women as the wheels of our political moment,” legal scholar Kimberlé Crenshaw, who moderated the event, told the audience to approving nods. “It’s another to put them in the driver’s seat.”

With the beginning of a new year, especially one that will end with a highly anticipated midterm election, the Alabama result offers hope for Democrats eager to regain political power in the Trump era.

But for black women, the post-Alabama moment also presents an additional opportunity, a potential turning point in how they are treated in political circles. Both parties have been reminded yet again that black women have been a consistently reliable bloc for the Democrats. In 2018, black women say they want to see a return on their investment.

In the weeks since the Alabama election, it’s become more clear that Democrats’ victory came from massive grassroots efforts by black organizers on the ground in Alabama.

“We hit the ground running and we did the work that it took to get Doug elected,” Carissa Crayton, a Jones canvasser, told HuffPost’s Julia Craven shortly after the Alabama election. “People shouldn’t disregard that and just think … we saved the day without doing any hard work, that we just magically went out and voted and that that’s all we did.”

As the Atlantic’s Vann Newkirk noted in an article examining black voter mobilization efforts in Alabama, much of the effort to turn out black voters was driven by the work of independent organizers rather than political campaigns.

The most active voter outreach and mobilization efforts targeted at black voters in Alabama, including the collaborative work of groups like Woke Vote, Black Voters Matter, and BlackPAC, were driven by black women, many of whom brought years, if not decades, of political organizing experience to the contest.

BlackPAC, a group which seeks to build black political power across the country, is one example. Last fall, the group launched a $1.1 million campaign focused on engaging black voters ahead of Virginia’s gubernatorial election.

The campaign, as BlackPAC’s executive director Adrianne Shropshire explained to me at the time, was created due to the need for more persistent political engagement in black communities. Politicians need to “grasp the significance of the concern and anxiety that is being felt inside of communities of color,” Shropshire said, adding that black voters need to …

Oprah for president in 2020? Here’s everything you need to know.
UK Party Suspends Leader’s Girlfriend over Racist Remarks About Meghan Markle