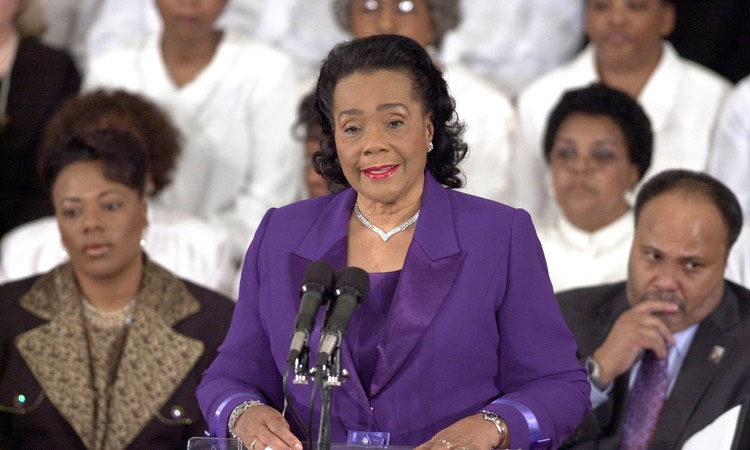 Coretta Scott King was, in so many ways, one of the mothers of the civil rights movement. As an author and activist, she worked tirelessly not only to continue the legacy of her late husband, Dr. Martin Luther King, Jr, but also to fight on behalf of civil rights around the world for so many people. On what would have been her 90th birthday, we celebrate the life of this incredible activist by remembering some of her most heartfelt sentiments and staunchest criticisms, and these Coretta Scott King quotes can inspire the resistance to keep fighting.

King’s name re-entered the political fray shortly after President Donald Trump took office, when Sen. Elizabeth Warren was barred from reading a letter written by King opposing then-Alabama Attorney General Jeff Sessions’ federal judge nomination in 1986. The biting criticism — and Warren’s silencing by Senate Majority Leader Mitch McConnell for quoting it — proved to the fledgling resistance against Trump that King’s words are as important now as they were 31 years ago, when she first wrote them.

While King’s criticism of Sessions is eerily apt given that Sessions is now our country’s attorney general, she also made a number of other powerful statements during her long life in activism. Below are some that not only showcase her talent as a speaker and her incredible life, but that are timely in our current political climate.

1. “Women, if the soul of the nation is to be saved, I believe that you must become its soul.”

King’ understanding of a “woman’s place” is timeless. This quote, from the 1970 quote anthology Daughters of the Promised Land, Women in American History, perfectly illustrates King’s grasp of her own role and the role of women within activism. With the many apparent attacks on women we face today, it’s no wonder why the Women’s March chose to use the quote.

2. “If American women would increase their voting turnout by 10 percent, I think we would see an end to all of the budget cuts in programs benefiting women and children.”

King’s life and tenure in the African-American civil rights movement set the stage for her understanding of the power of voting rights — Marion, Alabama, the city where she went to school, was the site of the brutal police killing of Jimmie Lee Jackson in 1965 following an arrest and subsequent protests in favor of voting rights that are said to have sparked the Selma marches. As a black woman, King was intimately aware of the dual-pronged oppression of both her race and gender, and knew that…