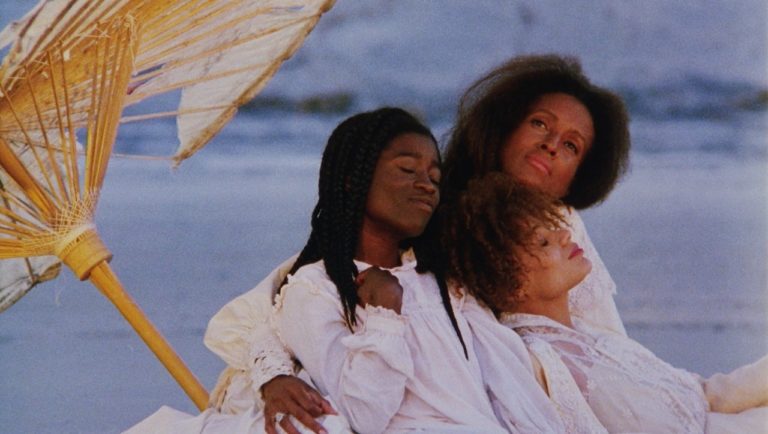 In honor of Black History Month and in the interest of keeping the #femalefilmmakerfriday feeling alive, here are five black women who got their directorial careers started before the year 2000.

Many of the most well-known black women filmmakers of today—including Dee Rees, Ava DuVernay, and Amma Asante—have made their filmmaking debuts since the turn of the 21st century. So no, while they are not on this list, I certainly did not forget about them. But in this article I wanted to take a moment to spotlight five black female filmmakers who managed to get their directorial careers started in the 20th century, when the state of behind-the-camera representation was even more abysmal than it is today.

Born and raised in Long Island City, New York, Dash established an interest in filmmaking after attending a film workshop at the Studio Museum in Harlem. She went on to earn a BA in film production from the City College of New York in 1974 and moved to Los Angeles, where she became a producing and writing fellow at the American Film Institute the following year. In 1986 she went on to complete an MFA in motion picture and television production at the University of California–Los Angeles. At UCLA she became involved in a group of other black student filmmakers who would come to collectively be known as the L.A. Rebellion.

Dash’s early short films were extremely well received. She received a Director’s Guild of America award Diary of an African Nun (1977), adapted from a short story by Alice Walker, and a Black Filmmakers Hall of Fame Award for her 1982 short Illusions, which tells the story of two African American women, one white-passing and one not, working in Hollywood during World War II.

“I want there to be more of every type of film you can imagine. I want to be able to see [African Americans] in Middle Earth. We don’t get to go beyond certain boundaries[…] I want to fly to the moon.”

In 1991, Dash’s first feature film, Daughters of the Dust, became the first full-length film directed by an African-American woman to obtain general theatrical release in the United States. It was chosen for inclusion in the National Film Registry of the Library of Congress for its cultural, historical, and aesthetic significance in 2004. It recently experience a popularity surge (and a 2K restoration and theatrical re-release) boosted by the release of Beyoncé’s Lemonade, which paid significant homage to the film.

However, in spite of the critical success of Daughters of the Dust, Dash met considerable resistance in Hollywood and migrated to television in the mid 1990s, directing a number of television films, including Subway Stories (1996) for HBO, Funny Valentines (1998) for BET Movies/Encore/Starz3, Love Song (2001) for MTV and The Rosa Parks Story (2002) for CBS. She also produced documentary shorts about health issues and directed music videos, including Tracy Chapman’s “Give Me One Reason,” nominated for an MTV Music Video Award. Last year she directed two episodes of the OWN televison series Queen Sugar.

Born in Martinique in 1958, Palcy moved to Paris, France while still a teenager to pursue her dream of becoming a film director. In her home country she had already had a successful career as a singer/songwriter and had even worked in television. In Paris she earned master’s degrees in both French literature and theater and a D.E.A. in art and archeology from the Sorbonne. She also earned a film degree from the Louis Lumière School of Cinema with a focus in cinematography.

With the help of François Truffaut and a grant from the French government, Palcy made her first feature film, Sugar Cane Alley, in 1983. Adapted from the 1974 novel La Rue Cases Nègres by Martinique author Josef Zobel, the film went on to win over 17 awards internationally, including the César Award for Best First Feature Film from the French Film Academy and Best Lead Actress and the Silver Lion at the Venice Film Festival, making her the first black director to win an award at the festival. Sugar Cane Alley was also an international box office success, out-grossing that year’s biggest Hollywood blockbuster, Spielberg’s E.T.: The Extra-Terrestrial, in her home country of Martinique.

“You must be honest. You cannot lie or put limits on what you are talking about. And if the audience cannot take it, they cannot take it. You have to respect your subject.”

With the 1989’s A Dry White Season, Palcy became the first black woman to direct a feature film produced by a major Hollywood studio (MGM). Marlon Brando felt that the subject matter of the anti-apartheid drama was so important that he returned to acting after a nine-year hiatus for the sake of the project, and ended up receiving an Academy Award nomination for his performance.

Palcy has also directed a number of other projects, including the feature film Simeon (1992), the three-part documentary series, Aimé Césaire: A Voice for History, the Disney television movie The Ruby Bridges Story (1997), and the Showtime television movie The Killing Yard (2001).

Palcy has received a number of industry awards and honors. In 1994 the president of France, François Mitterand, bestowed upon Palcy the title Chevalier dans l’Ordre National du Mérite (Knight in the National Order of Merit) and in 2001 she received the Sojourner Truth Award at the Cannes Film Festival. A movie theater in Amiens, France was named in her honor in 1997.

A director, producer, and reporter, Anderson is best known for her work in documentary film and television. After graduating from New York University, Anderson found a job working for documentarian Richard Leacock at his company, Andover Productions, in 1958, as a production manager. In 1960 she completed her first independent documentary short, Integration Report One, which has since been accepted into the Smithsonian National Museum of African American History and Culture.

As a documentarian, she maintains three constituents of documentary practice: her films must have utility and social purpose, must give a voice to protagonists who have been marginalized or otherwise silenced, and must resist and debunk the persistent stereotype that African Americans are unable to manage their own affairs (no white saviors here). Of her documentaries, the best known is likely I Am Somebody (1969/1970) which follows four hundred black hospital and nursing home employees, of whom the vast majority were female, who went on strike in…

Cardi B Makes A Historic Move Becoming The First Rapper With Three Singles In The Top 10 Simultaneously
Colourism: Do light-skinned black women have it easier in showbiz?