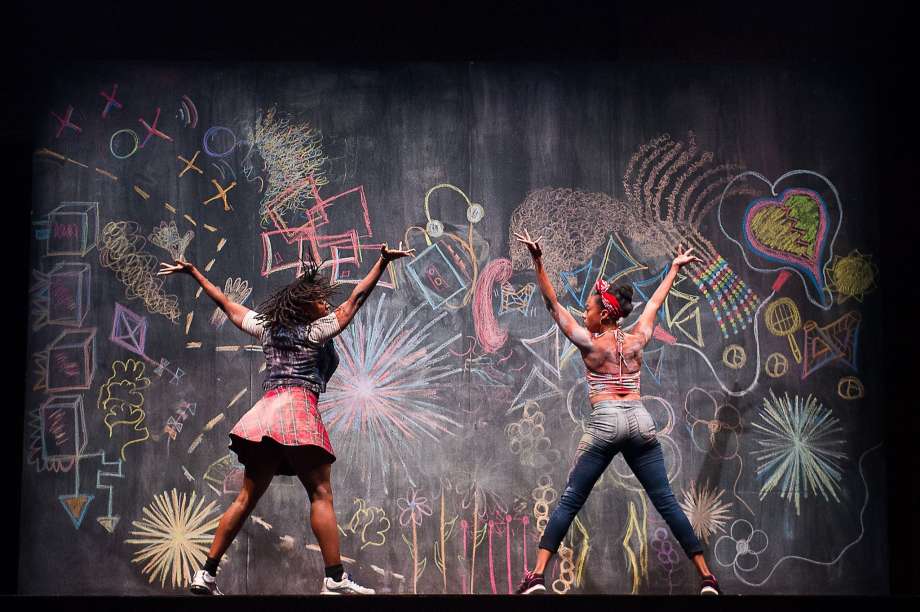 Camille A. Brown speaks frankly. “I knew that because the work was called ‘Black Girl,’ some people would say, ‘I can’t relate to this because I’m not black, or I’m not a girl,’” says the award-winning choreographer and dancer.

“As an audience member, I’m challenging you to think whether you can honestly say you can’t see yourself.” Interrogating that sense of exclusion is exactly the point of “Black Girl: Linguistic Play,” which Camille A. Brown & Dancers perform at Cal Performances’ Zellerbach Playhouse starting Friday, Dec.8.

Brown spoke by phone from her home base in New York, on a break from previews of “Once on This Island,” the first Broadway musical for which she has sole choreography credit. “My name is on the poster with the writers and the director,” she says. “I wasn’t expecting to be on it at all, but my name is the same size as theirs. I just said to myself, ‘OK, no pressure!’”

Despite her elite profile and A-list status, with four Princess Grace Awards, a Guggenheim Fellowship and countless other accolades and commissions to her name, Brown, 37, says the vulnerability of black girls growing up in America still resonates with her.

“Childhood seems so far away,” she says. “Since then I’ve seen racism and sexism, and all different forms of oppression. And to have to set that aside in order to go back to a time when you had no idea what those things were was really, really hard.”

In “Black Girl,” she uses African American vernacular dances like double Dutch, tap, Juba, ring shout and steppin’ to reconnect with the lost innocence of childhood. Performed by Brown and four other women, the dances are dazzling in themselves; by putting them on a formal stage, Brown makes visible their physical inventiveness and emotional power.

“Camille decided to go back to childhood and back to play, and ask where these things are launched inside the psyche of a person,” says Cal Performances Associate Director Rob Bailis, who included “Black Girl” in the Joining Generations program, which surveys the past five decades of American dance. “It’s what makes this piece so special. It comes from such a personal inquiry, but she’s ended up making a completely universal piece of work.”

It hasn’t been easy. In a 2016 TEDx Talk, Brown spoke movingly about showing an early version to a high school audience; when she asked the mostly white students what hearing the phrase “black girl” made them think, their response was entirely negative. “The thing that really upset me was the mannerisms that they were doing,” she says. “They thought it was a joke.”

Adults fall prey to stereotypes too. Brown recalls that after one performance, “a woman came up to me and said that out of all of the shows at that particular venue, my piece was the one she didn’t want to see because of the title.”

The seeds of the work were planted during talks after Brown’s previous work, “Mr. Tol E. Rance,” a Bessie Award-winning piece about minstrels, with …

Continue Reading
You may also like...
Related Topics:Camille A. Brown, dancer

“My Dreams Were Born On This Very Street:” Block Rihanna Grew Up On In Barbados Is Renamed In Her Honor
Theater review: One-woman show “Hi-Hat Hattie” touts the legacy of an African American pioneer in Hollywood