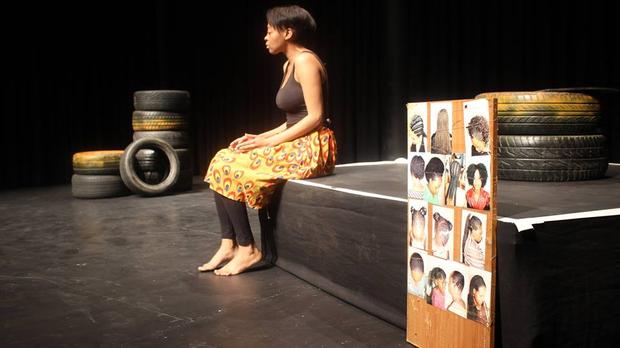 The complexity of human emotion and interaction takes center stage in the play Complexions, currently showing at the Soweto Theatre.

Complexions opens with the only cast member and writer of the play Mbali Malinga, in the role of an observer, possibly an anthropologist looking into the lives of ordinary Black people living in a township. In our mind’s eye, we are compelled to imagine this person geared up in safari clothing: the consistent usage of binoculars and a ridiculous accent to match do not help dispel this conjured image.

The observer chronicles (and to a certain extent, caricatures) the life of Smangele, a Black woman who is in a relationship with an alcoholic and is somewhat of an outcast in her community. Smangele later gives birth to a baby girl whose skin is described in awe and fascination by the observer as: “dark, with the ability to protect her from harsh sunlight”. It’s as if she has a superpower, of sorts.

Peter, the young girl’s father, staggers towards Smangele demanding that she hand over the baby so he can have a good look at her. In his drunkenness, he unwittingly names the child Nyiwe, which is derived from a rather derogatory term for relieving yourself in isiZulu. He says to her; “uMamakho ukunyile wena” ( Your mother sh#t you”). And the name sticks.

As we follow Nyiwe through the stages of growth, from her playing in the streets to when she hits puberty, the play forces us to deal with the issues of the hyper-sexualisation of young girls, poverty, bullying, the impact of addiction on the family life and other issues that are hidden in plain sight.

At the end of the play, Nyiwe, now a teenager with a more womanly body, is groped and sexually harassed by her childhood crush and friend Thabo. Thabo, is acting out from a combination of peer pressure and the need to assert some form of masculinity. He drags her off into a dark corner, leaving the audience to piece together what happened next.

The audience on the afternoon I watched the play was made up of young teenagers. Afterwards, the play director Refilwe Lepere and Malinga launched into a conversation with the youths, trying to figure out what their take on the play was.

At various points in the production, I raised eyebrows at the raunchy descriptions that sounded slightly over the parental guidance mark. As expected, some of the youngsters would giggle while others cringed when the subjects were discussed in the …