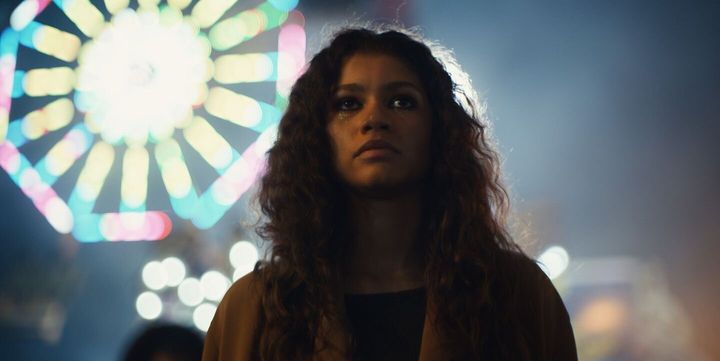 By Zeba Blay via https://www.huffpost.com/

Black girls are rarely given room to mess up, to make mistakes, to grow. Zendaya’s role as Rue is game-changing because she is, by her own admission, the ultimate f**k-up.

In “Euphoria,” Zendaya plays Rue, a 17-year-old living in the suburbs who has just gotten out of rehab ― with no actual plans to stay sober. With an acerbic sense of humor, she narrates her life and those of the kids from her high school, as she grapples with her addiction, her intense relationship with a new best friend named Jules (Hunter Schafer), and the general chaos of the lives of those around her.

In Episode 1, we watch jock McKay (Algee Smith) and popular girl Cassie (Sydney Sweeney) begin to have sex. At one point, McKay, taking his friends’ advice that he should be rough with Cassie because she apparently has a “reputation,” starts to choke her. The scene freezes, and Rue’s voice reenters the narrative. “Now, I know this looks disturbing but for real,” she says, “I promise you, this does not end in a rape. But here’s the thing … ”

With scenes like this, it comes as no surprise that the current conversationsurrounding “Euphoria” ahead of its June 16 premiere is the fact that it is incredibly raunchy ― graphic sex, nudity and drugs run rampant over its six-episode season. The HBO series, which is …

Read More: ‘Euphoria’ And The Black Girl’s Coming Of Age

Continue Reading
You may also like...
Related Topics:Euphoria, Zendaya

Netflix’s “See You Yesterday” Is About the Power of Black Girls in STEM
With its biggest showing yet, DC Black Theatre & Arts Festival goes beyond race