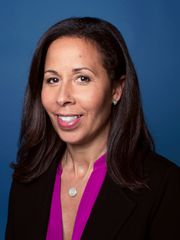 By Jessica Guynn via https://www.usatoday.com

SAN FRANCISCO — Facebook will nominate prominent technology executive Peggy Alford for election to its board.

Alford would be the first African-American woman and second African-American to join the board of the social media giant. Her nomination at the company’s annual meeting on May 30 would mark a major step in diversifying its nine-member board.

Last year, Facebook named former American Express CEO Kenneth Chenault to its board. The move came after years of pressure from the Congressional Black Caucusand civil rights leaders such as the Rev. Jesse Jackson to add black executives to its board as part of the company’s efforts to reverse decades-long patterns of exclusion in the high-tech industry, which mostly employs white and Asian men.

Erskine Bowles, president emeritus of the University of North Carolina, and Reed Hastings, chairman and CEO of Netflix, will not be nominated for re-election at the shareholder meeting, the company said. Both have served on the board since 2011.

Continue Reading
You may also like...
Related Topics:Facebook, Peggy Alford