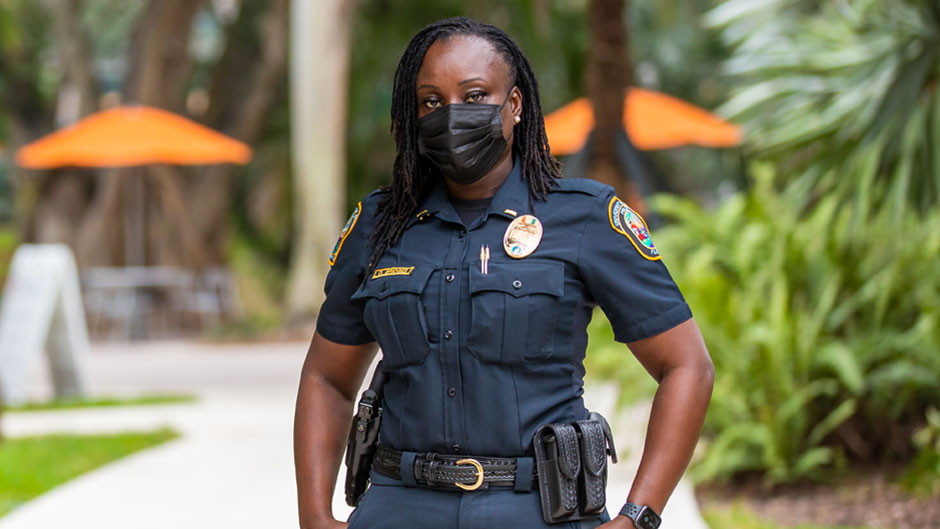 Octavia Bridges, a 20-year veteran of the University of Miami Police Department, has been promoted to oversee crime prevention and community relations on the Coral Gables Campus.

Octavia Bridges became a trailblazer on Dec. 3 when she was sworn in as a lieutenant of the University of Miami Police Department (UMPD). She will be the first Black woman to serve as a lieutenant, after serving as a sergeant in the department.

“We had a tremendous interest from a lot of people outside of our employees, but at the end of the day, Lt. Bridges was the best choice for us because of her 20 years of experience,” said David Rivero, UMPD chief. “She will serve as the bridge between the police and our community.”

Since it was founded in 1969, UMPD has maintained a diversified lower rank. Currently, 37 percent of their sworn officers are Black, 47 percent Hispanic, and 32 percent are women.

Jacqueline Travisano, executive vice president for business and finance and chief operating officer of the University, envisioned this position to strengthen the relationship between the many different community groups on campus, Rivero said. Prior to December 2020, UMPD did not have a community relations unit.

“To promote and maintain a safe environment on campus, it is critical to have the members of our police department interacting each day with our University community,” Travisano said. “Lt. Bridges will be instrumental in that effort.”

Bridges said that she is very excited and looks forward to this new challenge.