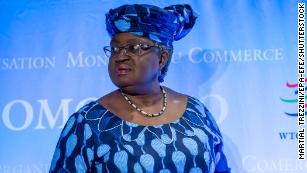 By Nimi Princewill via https://edition.cnn.com/

Ngozi Okonjo-Iweala is poised to be confirmed as leader of the World Trade Organization on Monday.

She will become the first woman and the first African to lead the global trade body.

An economist and former finance minister of Nigeria, Okonjo-Iweala enjoyed broad support from WTO members including the European Union, China, Japan and Australia. The United States, under the Trump administration, had favored Yoo.