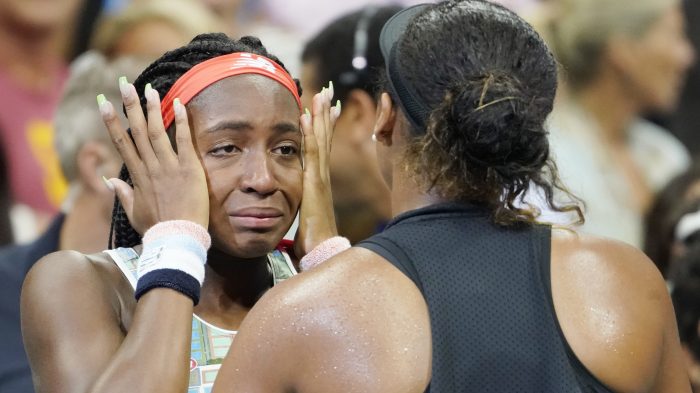 BY SORAYA NADIA MCDONALD via https://theundefeated.com

Tears are not unfamiliar in women’s tennis. But the winner inviting her defeated competitor to share the postmatch spotlight is.

And yet that’s what happened after No. 1-ranked Naomi Osaka, the defending tournament champion, defeated Coco Gauff 6-3, 6-0 in the third round of the US Open Aug. 31.

It was the 15-year-old Gauff’s first time playing a Grand Slam tournament match in the giant Arthur Ashe Stadium, and in primetime, no less.

“Naomi asked me to do the on-court interview with her and I said no, because I knew I was going to cry the whole time, but she encouraged me to do it,” Gauff said during the televised interview, still wiping away tears. “It was amazing. She did amazing and I’m going to learn a lot from this match. She’s been so sweet to me.”

What a moment — so raw, so genuine, so vulnerable and sweet, made…