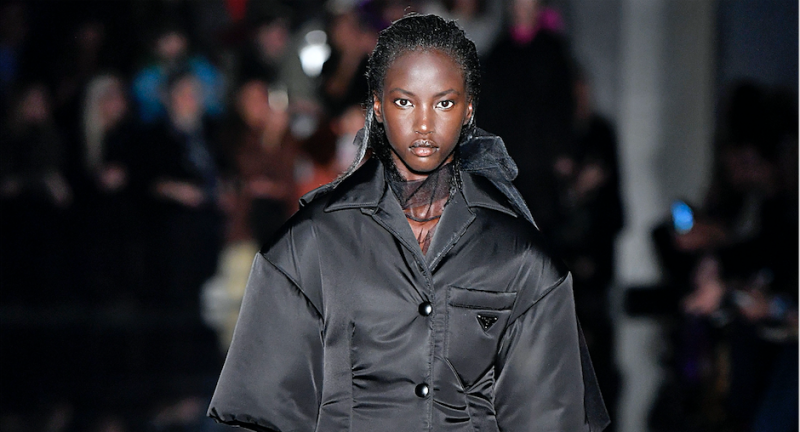 Black girls have been ruling the runways this Milan Fashion Week (Feb. 21-Feb. 28). Case in point: For the first time since Naomi Campbell’sopening strut back in 1997, Prada tapped a black model to open its fashion show (Jourdan Dunn is the only other black model to be booked by this global powerhouse brand since 2008). The coveted career-making position went to 19-year-old Sudanese model of the moment, Anok Yai.

Yai, who was raised in Egypt, was discovered when photographer Steven Hall’s Afrocentric street-style blog The Sunk posted a photo of her at Howard’s 2017 homecoming that went viral last fall. Now exploding with over 144,000 Instagram followers, she’s poised to blow all the way up.

Luckily, Yai happens to be represented by Kyle Hagler, president of Next Models. Hagler, one of the most powerful agents in the business, also happens to be black. Booking Prada is a triumph for model and agent alike, and though, in my opinion, the brand has a very long way to go before I would support it with my dollars or clicks, it is clearly evolving.

But overall, Milan showed a lot of beautiful black women on its fall runways. Natural hair and glowing skin were the order of the day, from Versace to Fendi.

At Versace, ’90s neon-brights mixed with punk and ska-inspired plaid and black-and-white checks were the theme. Mixed patterns and bright colors are classic vintage Versace; an exuberant kind of youth-riot fashion insiders and consumers can’t seem to get enough of, judging by the FX hit miniseries American Crime Story: The Assassination of Gianni Versace, not to mention the amount of Versace heritage prints I once again see people wearing on the streets of New York.

Proving that the trend is catching, Prada was also full of neon brights and industrial-inspired designs that reminded me a bit of designer Virgil …

Continue Reading
You may also like...
Related Topics:Anok Yai