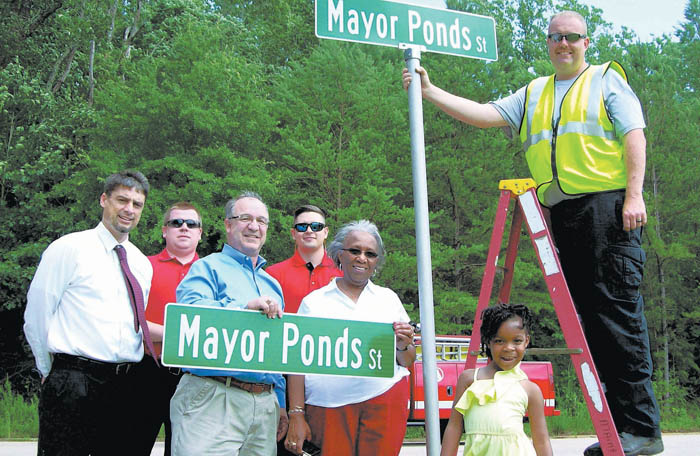 GRANITE QUARRY — Would something such as this have happened in Granite Quarry 20, 30 or 40 years ago? A humbled and overwhelmed Mary Strawder Ponds doesn’t think so.

“That tells me things are changing and have changed,” Ponds said Tuesday, noting that the town board unanimously voted to rename Granite Street to Mayor Ponds Street in honor of her service to the town and community in general.

“… It’s overwhelming, because you say, ‘What have I done to deserve this?’ … I never imagined. I never ever thought a gesture like that would be done for me.”

Ponds was the first woman and first African-American to be mayor in Granite Quarry, which is predominantly white in demographics. She served as mayor for 14 of her 16 years on the town board.

She decided not to seek re-election in 2015.

In an informal street dedication Friday, Ponds posed with current Mayor Bill Feather as the new street signs were mounted on poles. The street will be one of the main roads serving a new State Employees’ Credit Union branch on the north end of town.

Ponds has been a longtime member of the local SECU board, among others, and she first lobbied for the branch to be located in eastern Rowan County — more specifically, Granite Quarry.

“The credit union’s coming to Granite Quarry was my baby,” Ponds said. “… I kind of fought for that from the very, very beginning.”

Ponds said Feather called her one day more than a month ago and said, “How would you feel if we named a street after you?”

Feather explained he was going to take a proposal for naming Granite Street for her to his whole board. Ponds said her first reaction was, “Do you think the board would agree to that?”

The board voted unanimously for a resolution renaming the street earlier this month. Ponds said such an honor for an African-American woman in Granite Quarry might not have been possible decades ago.

“People change, situations change,” she said. “We have to appreciate each other for who we are. There’s value and wealth in all of us.”

Ponds is a retired teacher and native of Rowan County. She graduated from J.C. Price High in Salisbury…