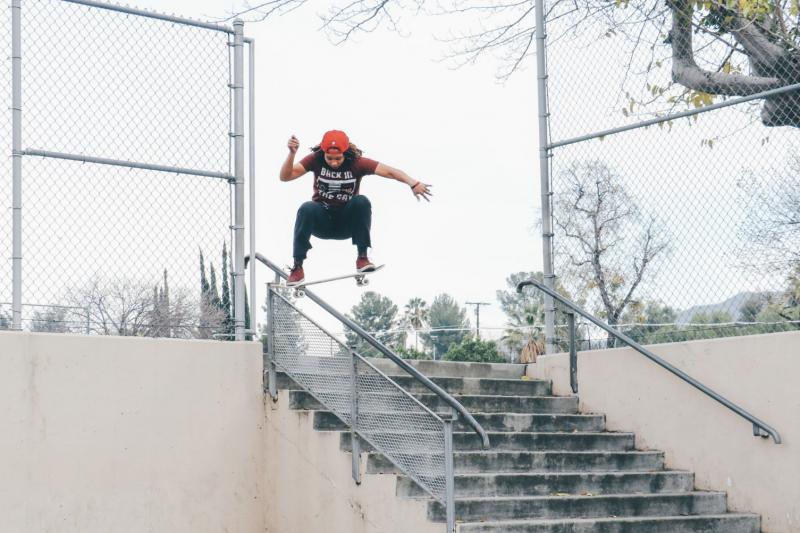 Samarria Brevard is many things. The 24-year-old SoCal native is a top female skater, an emerging style icon and a history-changing figure in a sport that has not always been kind to outsiders.

The “Serena Williams of skateboarding” can make a half-cab (aka Ollie 180) off a nine-stair look easy, make your grandma’s bucket hat feel cool and make her way to the podium at the X Games, where early this year she became the first African-American woman to medal in the contest’s 22-year history.

It was a monumental, career-making achievement. And as we approach the end of 2017, things don’t appear to be slowing down for Brevard.

Last week, she turned pro for Enjoi—a seminal skateboard company founded in 2000 by street-tech genius Marc Johnson. The week before that, iconic shoe company Etnies welcomed her to its heralded skate team and announced a Samarria Brevard signature shoe. These are all firsts for an African-American woman.

What could possibly come next? Bleacher Report caught up with the hard-training, overalls-donning pro to talk high tops, professional pressures and what it’s like to be a black woman in a sport historically dominated by skinny white dudes.

Bleacher Report: The big news is that you just officially joined Etnies. These days, that team is so talented it’s comparable to the Chicago Bulls in the ’90s.

SB: Etnies was one of the teams I wanted to get on as a kid. It’s legendary. Their shoes always fit well and had STI foam padding [Etnies patented insoles] and all around were just really good shoes. Right now, the whole team is epic. Ryan Sheckler. Nick Garcia. Chris Joslin. Matt Berger. The team is stacked right now. All those dudes are so, so good.

B/R: Let’s set the scene. When did you get the call?

SB: When I was back at home after the X Games. On my last run, I landed a Tre Flip [360-degree/full-cab kickflip] down the eight [eight-stair drop]. I was really pumped on that one, and ended up in second place. I made it home and they called that week.

Stoked on 2nd place! My goal was to do better,and I accomplished it. Feels good. I want to give a big thank you to @etniesskateboarding for helping me get to @xgames this year to even have a chance of making the podium. Also thank you to @hooplaskate @movieticketsdotcom @cloud9griptape @activeriverside @activerideshop @bonesbearings @dakine_skate @rastaclat @thundertrucks for the support. I truly appreciate all of it. #blessed #somehowigotonthepodium #2ndplaceilltakethat #xgames #thankfulonanotherlevel

B/R: Now you get to work with the Etnies STI lab to help design your own shoe. Any ideas so far?

SB: On my signature for the shoe will be my name and a dragonfly.

B/R: A dragonfly? Not exactly a gnarly skate symbol, like a hawk skull or a bulldog’s head or a pentagram or something.

SB: I chose the dragonfly for my symbol because they’re so colorful. I feel …