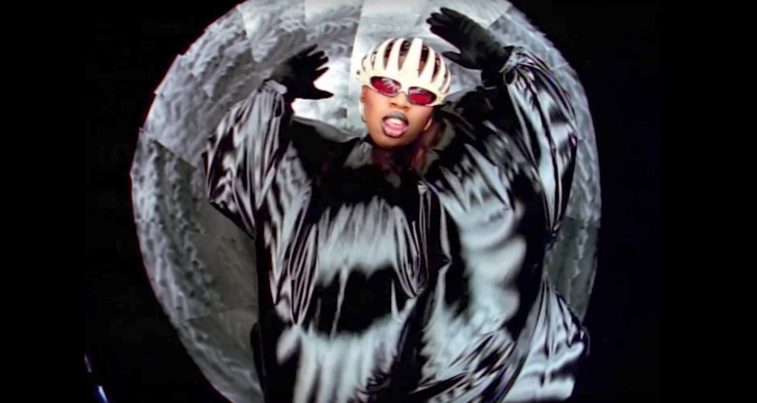 Her embodiment of femininity taught me being weird is also beautiful.

Welcome to Lifestream, where Teen Vogue’s writers take music one step further and discuss how the biggest and best songs on your favorite playlists turn into the soundtracks of our lives.

A black trash bag may not mean much to you, but for me, it’s a fashion statement — one I read at a very young age. The garment: a shiny, onyx bodysuit, ballooning a dark-skinned, full-figured black woman. As she stomped and swayed in her marvelously monstrous attire, her mouth spit words of fire and confidence. She, a woman with a body society deems too big, and skin too dark, adorned a bodysuit that expanded on these notions. I stared in wonder at a woman who amplified the qualities that made her unique, who used her style, makeup, and music to reject Western beauty standards. She defined her own standard of beauty by being a boss.

The garbage bag-sporting goddess is of course none other than Missy Elliot in the “The Rain (Supa Dupa Fly)” music video. My older brother and I, growing up in the ‘90s, were obsessed with music and music videos. Back then, the radio, MTV, and BET were our primary sources for new music, and of course, we owned a cassette player until upgrading to a CD player in our teens (we didn’t see iPods until we were young adults). Having such specific outlets of music meant we found creative ways to savor our favorite songs: like surrounding the radio with a blank cassette tape inside, eagerly waiting to press record when a song we liked played, or watching TRL and MTV’s then countless other music video programs in anticipation of our favorite music video. The best part was hearing a hot new song and imagining what the visuals for it would be.

We weren’t ready for the “The Rain” video. Everything about Missy moved us: the twitchy, erratic dance moves, fisheye camera shots that made you feel too close to her, but intimate enough to be in her personal space, her cropped haircut, the way her eyes and mouth popped out toward the end of the video. And of course, that amazing trash bag jumpsuit, paired with burgundy shades and a sick, striped metallic headpiece. And oh, the cameos! Diddy, Lil Kim, Timbaland, and Da Brat appeared in this video, among others. Missy arrived right on time: with peers such as Busta Rhymes, the Bad Boy family and SWV, Missy’s music felt prolific and relevant all at once. But her main crew, a …

Continue Reading
You may also like...
Related Topics:Black is beautiful, Missy Elliot