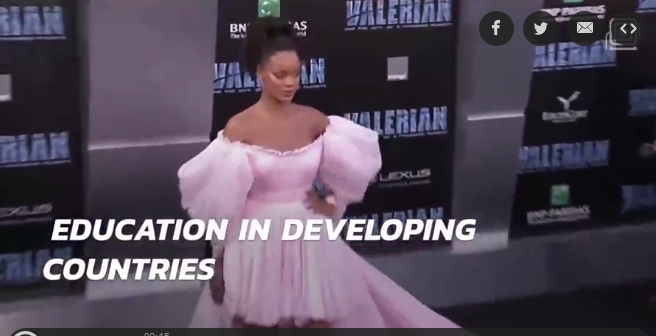 Rihanna, an international pop star, actress and budding diplomat, is serious about getting world leaders to pay attention to global education.

About a month after tweeting at Emmanuel Macron about his plans to fund education, RiRi met France’s president and first lady, Brigitte Macron, to discuss the issue face to face. The “Umbrella” singer shared a tweet about the meeting on Wednesday afternoon.

“Thank you Mr. President@EmmanuelMacron and Madame First Lady for the incredible meeting and passion for global and girls education!” she wrote.

Macron also shared a photo from the pair’s meeting on Twitter, adding that he’s committed to working with Rihanna and her Clara Lionel Foundation, as well as Global Citizen.

Committed with @GlblCtzn, @ClaraLionelFdn and @rihanna to #FundEducation. 264M children are out of school : let's take up this challenge! pic.twitter.com/tzvo5EBIPl

Upon seeing the photos of RiRi with Macron, folks on Twitter were loving it.

You're more presidential than Trump. Thanks for making the world a better place with your music and your activism! pic.twitter.com/YiacxqapUP

And thank you for making a change in this world that we currently live in 😬 pic.twitter.com/iA9CiRyGL7

Over the years, Rihanna has become quite the philanthropist, using her fame to influence positive change in the world and bring attention to important issues.

Aside from continuing to advocate for “effective education and health programs around the world” through her Clara Lionel Foundation, she launched a scholarship last year to …

Continue Reading
You may also like...
Related Topics:Black girls on education, Rihanna

A ‘Portable’ Overview Of A Complex, Compelling History
FANTASIA: HOW SHE HAD TO LOSE TO WIN