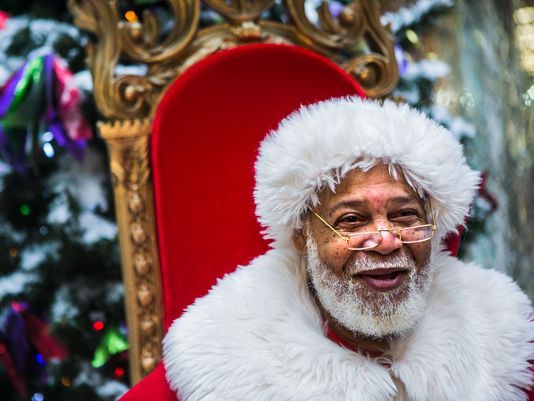 Close to 63% of Memphis residents are African-American, according to the U.S. Census. Yet the Santa Claus population remains — to apply census terms to the embodiment of Christmas magic — majority white.

Maybe that’s why travelers from across the South make a Memphis pit stop specifically to see the city’s most celebrated black mall Santa.

“Not to be funny, but they want to see a black Santa,” said Raymond Conley, 65. He has been the resident Kris Kringle for the past eight years at Southland Mall, the retail anchor for the South Memphis neighborhood of Whitehaven.

“They come from Texas, St. Louis, Atlanta,” he said. “They want their kids to see a black Santa.”

“We have at least 10 calls a day from people asking if we have Santa here,” Rixter said. “The second question they ask is, ‘Is he black?’ “

The concept of a black Santa is hardly new. As early as the 1940s, stores in New York City’s Harlem neighborhood and Chicago hired black Santas. But even after the advent of “Black Power,” when Brook Benton applied his silky baritone to the single Soul Santa in 1971, the notion was presented as more Utopian than likely:

Wouldn’t it be so revealing
If Santa had black kinky hair?
I know his cheeks wouldn’t be rosy
But still you could tell the man was cold
When you saw his red underwear peeking
Over his soulful, soulful jelly roll.

In 2016, the sprawling Mall of America in Bloomington, Minn., hired its first black Santa, for a residency of only four days that this year expanded to nine days. The result was a Santa who was “booked solid,” according to Minneapolis’ Star Tribune.

The move attracted plenty of social media hate as well as support but not as much as attached to Megyn Kelly when the Fox News personality waded into the Santa debate on air in 2013: “By the way, for all you kids watching at home, Santa just is white.”

‘Santa can be any color’

Sometimes even the kids who climb on his lap believe that, Conley said.

But that skepticism has become less prevalent.

“It’s symbolic. Santa can be any color,” said Conley, a light-skinned, freckled man with a trim white beard who said he has been mistaken for “a Mexican, an Asian, all of that.”

Conley is successor to the mall’s pioneering black Santa, the Rev. Larry Lee Love Sr., 66, who first donned the fur-trimmed red suit, knee-high black boots and shaggy white beard of St. Nicholas in 1997, after convincing Southland’s then-manager that a black …

Please read original article- ‘Santa can be any color’: Memphis’ black mall Santa brings visitors from across the South

Continue Reading
You may also like...
Related Topics:Christmas, Santa Claus

The Root 100 No. 1s: Melissa Harris-Perry Lets the World Know She Is Not Your Mammy
Blavity Publishes Erica Garner’s Final Essay On Her Relentless Fight For Justice