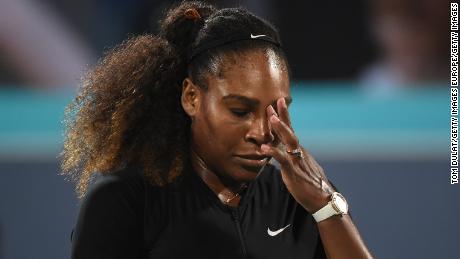 A new Vogue profile of Serena Williams sheds light not only on the health risks that can come with childbirth, but also how those factors — coupled with racial bias in the medical field — can have dangerous, even life-threatening results for black women.

In Vogue’s February cover story, Williams recalls dealing with serious complications shortly after the recent birth of her daughter, Alexis Olympia. Williams explains that the problems started the day after her daughter’s birth by Cesarean section, when Williams felt short of breath. Due to her history of pulmonary embolisms (Williams underwent emergency treatment for a life-threatening embolism in 2011), the tennis star quickly alerted a nurse about her symptoms.

But the response wasn’t what she expected. Vogue writer Rob Haskell explains:

She walked out of the hospital room so her mother wouldn’t worry and told the nearest nurse, between gasps, that she needed a CT scan with contrast and IV heparin (a blood thinner) right away. The nurse thought her pain medicine might be making her confused. But Serena insisted, and soon enough a doctor was performing an ultrasound of her legs. “I was like, a Doppler? I told you, I need a CT scan and a heparin drip,” she remembers telling the team. The ultrasound revealed nothing, so they sent her for the CT, and sure enough, several small blood clots had settled in her lungs. Minutes later she was on the drip. “I was like, listen to Dr. Williams!”

Williams adds that she continued to have problems after this scare. Williams coughed frequently due to the embolisms, and the coughs were forceful enough to cause her C-section wound to rupture. When she went in for surgery, doctors found that a hematoma had filled her abdomen, a result of the blood thinners. A filter was placed into one her major veins to keep more blood clots from traveling to her lungs. When she finally returned home, Williams needed six weeks of bed rest.

Williams’ harrowing account places her among the 50,000 women (an estimate that researchers say could actually be on the low end) in America who deal with dangerous or life-threatening, pregnancy-related complications each year. Black women are disproportionately likely to face these complications, and they are also more likely to fall victim to America’s ongoing maternal mortality crisis, being three to four times more likely than white women to die from pregnancy-related complications.

ProPublica and NPR, which have collaborated on an in-depth maternal mortality reporting project, note that many of these deaths are largely preventable. But due to the impacts of systemic racism and discrimination, including in the care provided by the medical system, black women remain more likely than any other group to die from their pregnancies.

As many black women on Twitter have noted, Serena Williams’s story shows just how hard it can be for black women at all levels of society — including elite athletes known the world over — to get the care they need.

This is how you know that racism in medicine can impact anyone at any income level. The staff should have been ready for a clotting issue based on her history. https://t.co/Ax1Boe22OA

Even Serena Williams can’t get proper care. This is why black women are statistically at the greatest risk for pregnancy-related deaths. The medical community does not take our pain seriously. https://t.co/hW2q9EFHfI

Black women are three to four times more likely than white women to die from pregnancy-related complications. The lack of disdain and trust from doctors factors into that, even when the Black woman is as powerful, famous, and wealthy as Serena Williams. https://t.co/XqUOW6MQIZ pic.twitter.com/Z9QgRKxKcm

The US has very high maternal mortality rates compared to the rest of the developed world. As Vox’s Julia Belluz has reported, overall maternal deaths have been on the rise in the US, increasing by 27 percent, to 24 deaths per 100,000 births, between 2000 and 2014. Belluz notes that this rate is more than three times the maternal death rate of the United Kingdom, and about eight times the rate of Netherlands, Norway, and Sweden.

In recent years, a growing number of maternal health-focused organizations and academics …

Continue Reading
You may also like...
Related Topics:childbirth, Serena Williams

Somebody Call RiRi: YSL’s ‘Diverse’ Beauty Campaign Has Twitter Up In Arms
29 Real Women Share Their Beauty Resolutions For 2018