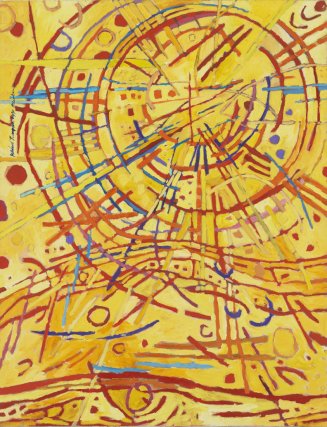 The National Museum of Women in the Arts (NMWA) announces the acquisition of two works by Mildred Thompson (1939–2003) in celebration of the museum’s 30th-anniversary year. With a career spanning more than four decades, Thompson created paintings, drawings, prints and sculptures with a signature approach to abstraction.

Inspired by the Atlanta-based Thompson’s inclusion in the recent exhibition Magnetic Fields: Expanding American Abstraction, 1960s to Today, the Georgia Committee of NMWA purchased a painting from her “Magnetic Fields” series for the museum. Camille Ann Brewer gifted a second work by Thompson to the museum to honor the memory of the artist.

“We are thrilled that donor Camille Ann Brewer and the Georgia Committee—one of 20 outreach committees around the world that support NMWA—have both donated to the museum’s collection incredible works by Mildred Thompson from the earlier and later parts of her career,” said NMWA Director Susan Fisher Sterling. “It is an honor to announce this gift today, on her birthday, and during the museum’s third annual #5WomenArtists social media campaign, which aims to increase awareness of gender inequity in the art world.”

After living in Europe to escape the racism and sexism that she had experienced in the United States, Thompson moved back permanently and began her series of “Magnetic Fields” paintings …

Continue Reading
You may also like...
Related Topics:Mildred Thompson