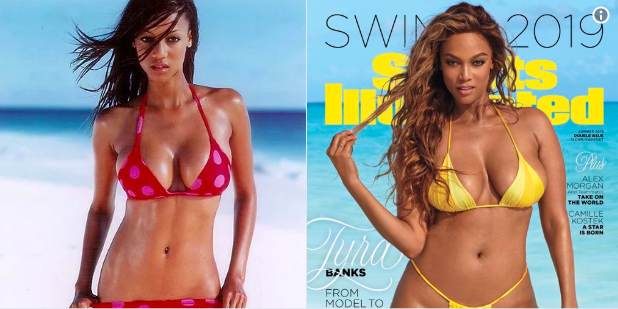 BY JANICE WILLIAMS via https://www.newsweek.com/

Tyra Banks has done it once again. The businesswoman and supermodel graced the latest cover of Sports Illustrated, released on Wednesday, after becoming the first black woman to ever achieve the feat more than 20 years ago.

Banks’ cover marks her third for Sports Illustrated as well as her big modeling comeback after retiring from the industry more than a decade ago.

The 45-year-old first made history as the first black woman to appear on the cover for the magazine’s iconic Swimsuit issue in 1996 alongside model Valeria Mazza. She landed a solo spot on the cover the following year wearing her famous pink polka-dot bathing suit.

The only other black women to ever appear on the cover of Sports Illustrated are Beyoncé, who appeared in the magazine in 2007, and last year’s cover girl, Danielle Herrington.

Read More: TYRA BANKS IS ONE OF ONLY THREE BLACK WOMEN EVER TO GRACE THE COVER OF ‘SPORTS ILLUSTRATED’

Continue Reading
You may also like...
Related Topics:Tyra Banks