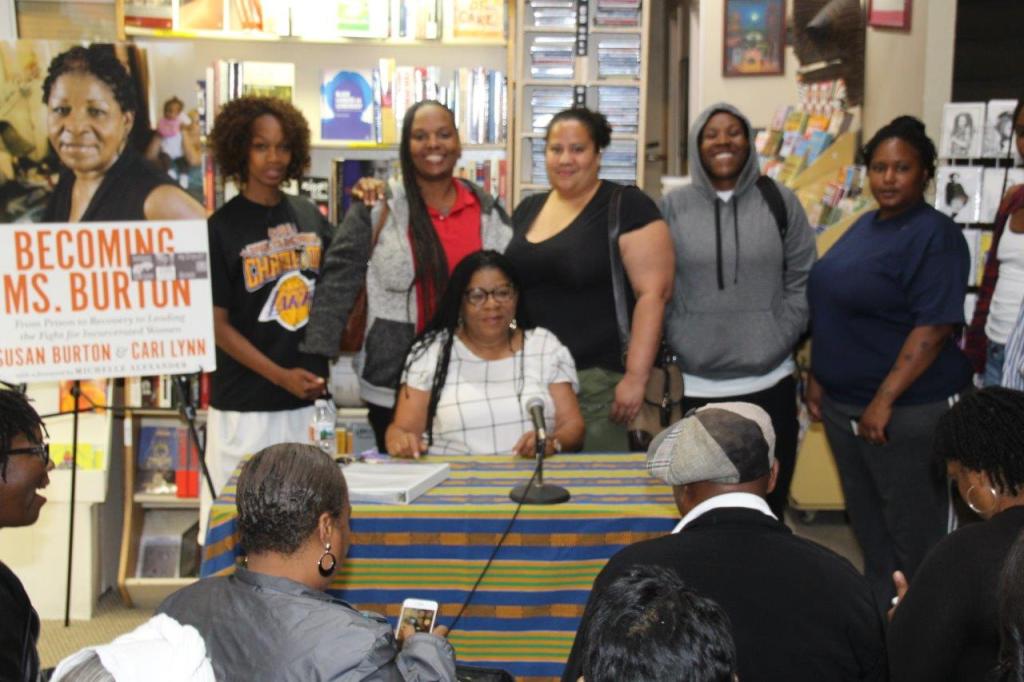 “We’re creating throwaway people,” says Susan Burton.  She should know.  She used to be one.

“Six times I had been imprisoned and each time I had hope that it would be the last time, but deep down I knew I wasn’t prepared for life outside,” she writes in her award-winning book, Becoming Ms. Burton: From Prison to Recovery to Leading the Fight for Incarcerated Women. “The system is set up to prove that “you’re useless.  If you’re useless, you have no value.  You’re a throwaway person.”

Now the founder and executive director of A New Way of Life, which helps formerly incarcerated women successfully re-enter society, and an internationally respected voice and human rights advocate, Susan gives women who find themselves in the same position she was in twenty years ago “a hand up and a means to stand on their own feet.”

“I’d been arrested over and over again for possession of a controlled substance. You’d think someone in the system might have gotten the idea that I needed drug treatment, that I needed therapy. But I was never offered help and I I didn’t know to ask for it because I didn’t know what to ask for,” Susan remembers.

Like many of the women who come to her for help, Susan had a history of trauma, abuse and addiction, and no idea how to break the cycle.  Her mission is deeply rooted in personal experience. “Women are the fastest growing segment of the (American) prison system,” she explains. “Yet, they’re not talked about, resources aren’t put towards them, nor (are there efforts at) stopping the recidivism. ”

As more and more women are “being criminalized and taken away from their families and children,”  Susan encourages us to ask: what’s the cost to communities and the country?  Two years ago, former U.S. Attorney General Loretta Lynch gave her opinion: “We know that when we incarcerate a woman we often are truly incarcerating a family in terms of the far-reaching effect on her children, her community, and her entire family network.”

In the past, a common assumption was that incarcerated people were distinct from everyone else, a realm apart. With upwards of a million women in prison, it’s become increasingly apparent that mass incarceration is inseparable from mainstream society.  We are a nation of prisons and prisoners.  And we are all diminished for it. “So many people with so much to give have been taken away from us.  We need to be working towards supporting all of that wealth and revealing the gifts (that can enhance) our communities instead of keeping them locked away,” Susan asserts.

A New Way of Life provides a vehicle for harnessing the wealth that often lies untapped and undirected.  Women, many of whom have been sentenced for non-violent drug-related crimes, are given the emotional support to heal and the practical tools to find employment, regain custody of their children, and incorporate healthier habits.

While she’s primarily dedicated to “raising the visibility of women in the context of mass incarceration,” Susan is also on a mission to help all women reclaim their authentic value. Which is why she is hopeful about the positive change that may come as a result of this year’s #MeToo movement. She believes it represents something larger. “Women are saying no more and never again. We are collectively standing up against the containment of women and women’s power.”

I first met Susan nearly twenty years ago after her sixth and final release from prison. She remembers that period vividly: “You offered me a full scholarship to your Essential Woman class.  Six months later, I was able to pay the full tuition of the class. Through that course, I found my own value.”  When we see others as useless …

Continue Reading
You may also like...
Related Topics:Susan Burton

Black woman asked midwife ‘is she mine?’ after giving birth to white baby
90-year-old woman has dance off with Santa

How Black Women Are Reshaping Afrofuturism