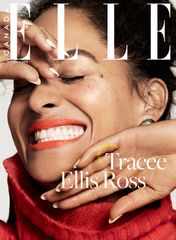 In an unprecedented move, almost all of the cover stars on the coveted September issues of mainstream fashion magazines – including Vogue, Glamour and Elle – are black.

September 2018 is clearly the month of #BlackGirlMagic, with the 12 black women listed above covering the fashion industry’s biggest (both in physical size and importance) issue of the year.

Even InStyle, which featured Jennifer Aniston on its primary cover for the September issue, tried to get in on the tail end of the action by including Dutch Moroccan-Egyptian model Imaan Hammam on one of their subscriber covers.

It’s a powerful statement on beauty, blackness and recognizing cultural tastemakers. Highlighting black women who not only run the gamut in skin tone, hair texture and …

Continue Reading
You may also like...
Related Topics:magazine cover

Bipartisan Group Of Senators Nominates ‘Hidden Figures’ Trailblazers For Congressional Gold Medal
Dancing Through the Pain: ‘A Mother’s Rite’ Moves Us Through a Parent’s Worst Nightmare