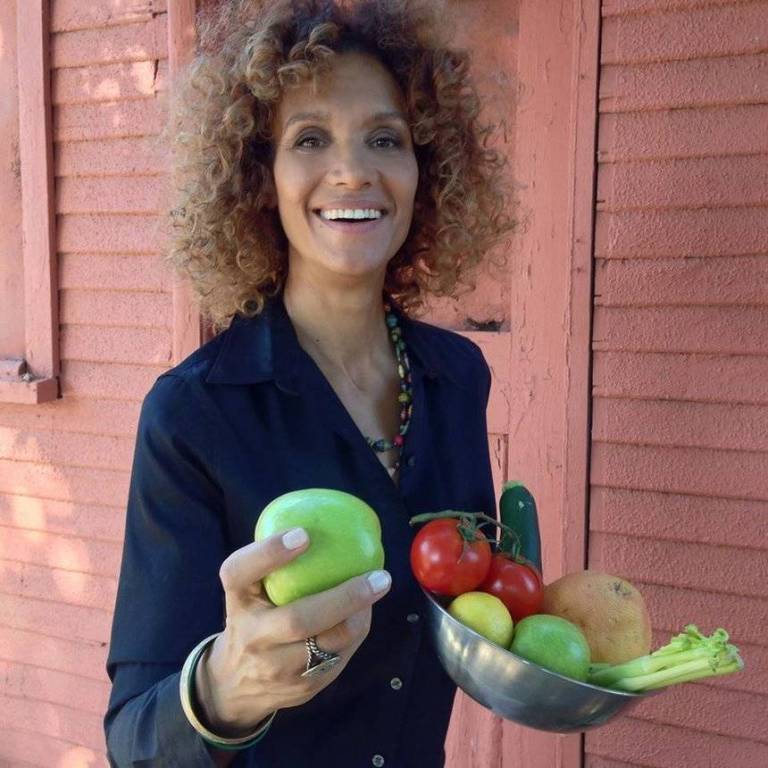 Angela Means made it in entertainment. She walked runways for Jean-Paul Gaultier and Betsey Johnson, did stand-up and opened for Chris Rock, Jamie Foxx and Sinbad, and appeared in the Nickelodeon show Cousin Skeeter and the movie Friday. (She’s Felicia.)

If you already think she sounds like a Renaissance woman just from that, check this out: She’s currently unleashing her creativity at the King’s Donuts on Crenshaw Boulevard in the Jefferson Park area of Los Angeles. Means is using the kitchen there to operate a plant-based restaurant called Jackfruit Cafe.

“All I can say is that the spirit led me. And now I have a vegan cafe in the ’hood.” That’s the short version. The longer version involves a lifetime love of cooking, a football-playing son (soon-to-be pro athletes eat so much food) and a family tragedy that jump-started Means’ interested in health.

Although she always loved to cook and enjoyed plant-based cuisine — she was vegetarian as a kid, and is now vegan — she’d never considered combining these two passions professionally until several years ago. She had stopped pursuing acting roles when her son was born so she could focus on raising him; when he got older, she started experimenting with cooking gigs. With no prior professional experience, she got hired as a personal chef and then moved on to preparing her own line of raw puddings and desserts. She started selling them at RAWkin Juice in Burbank, where she’s now a shareholder.

Last year, Means stumbled upon King’s Donuts. The space wasn’t even for rent, but she felt like it was meant to be hers. Her instincts panned out, and she opened Jackfruit Cafe on Sept. 1.

Means reports a pretty warm reception right off the bat. “People were like, ‘Oh my God, thank you. Where have you been?’” she says. “People are waking up now, watching films like What the Health. A lot of younger people are getting their older relatives to come in.”

Means describes her cuisine as soul food, and it has global influences. The Thai green curry jackfruit is rich with coconut milk …

Continue Reading
You may also like...
Related Topics:Angela Means