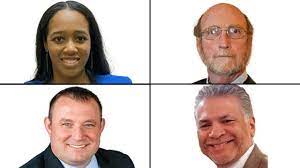 One of the longest tenured judges in Wyandotte County was unseated by his primary challenger in Tuesday’s election. With 11,796 votes, assistant district attorney Candice Alcaraz won 69% of the votes against Division 16 Judge Wes Griffin, who was elected in 2008. Alcaraz is the first Black woman to be elected district court judge in Wyandotte County.

This was the first time Alcaraz had run for public office and she organized a grassroots campaign, focusing on meeting voters so they could get to know her. She said she thought the vote would be close. “I’m very excited and happy to have the support that I had in this election,” she said