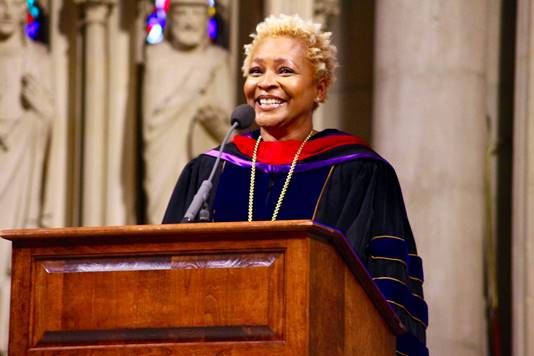 Written By NewsOne Staff via https://newsone.com/

A Black woman has made history at the New York Theological Seminary, causing major political figures to celebrate her milestone.

Dr. LaKeesha Walrond was inaugurated as president of NYTS, making her the first Black woman and first woman in general to hold the title. The initiation service was held on Saturday, October 26 and was attended by such New York figures like Mayor Bill de Blasio, First Lady Chirlane McCray, Rev. Al Sharpton and the New York NAACP State President Hazel Dukes.

The NYTS has been around for 119 years and during this time, they have yet to elect a woman and especially a Black woman as president. Dr. Walrond will serve as the institution’s 12th president and she will be bringing more than two decades of faith…

Armed with a rifle, this badass slave became the first black woman employed to carry the U.S. mail
4 Black Women Talk About Harriet And Her Lessons For Today