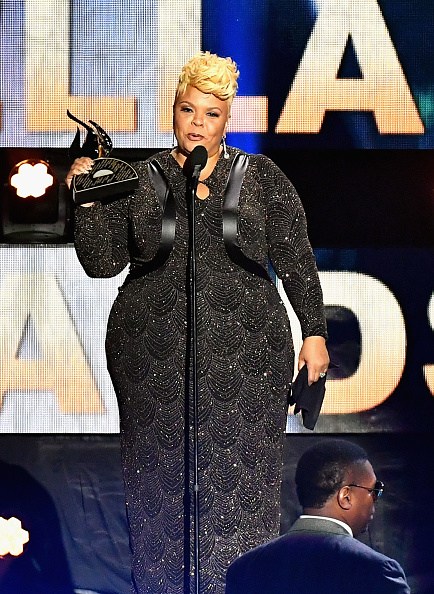 Actress and gospel singer Tamela Mann has been having not only a great year, but a great decade.

At this past weekend’s Stellar Gospel Awards, she had a total of nine nominations, including CD, song, and traditional female vocalist of the year. The gospel great brought home six awards, including Artist of the Year.

An actress, singer, songwriter and businesswoman, Mann ties Travis Greene for the most Stellar nominations this year. The artist began her career performing with Kirk Franklin before veering into acting. She has starred in numerous Tyler Perry projects, as well as TBS’ Meet the Browns with husband David Mann. Her fourth solo album, One Way, earned the Texas native a Grammy in February, for Best Gospel Performance/Song for “God Provides.”

With an award-winning song in 2013, “Take Me To The King” off an award-winning album, tours and a successful family reality show on TVOne, a new scripted show on Bounce TV and more in the works, her star continues to rise.

When asked what some of the hurdles were to get into the industry, Tamela candidly said, “One of the main struggles was my weight! I’ve always been good enough to be heard but not seen,” she revealed.

The vocalist who got her start singing in Kirk Franklin’s choir previously spoke more about her weight loss.

Her husband, co-star and collaborator, actor David Mann was diagnosed with type 2 diabetes in 2007, and now the couple is working with the American Diabetes Association to help others live a healthier lifestyle.

“For me, I just have to get my mind right, set mind and body. I don’t have issues with diabetes or hypertension, but I don’t want it to happen,” Tamela said…

Please read original article – TAMELA MANN: “I WAS GOOD ENOUGH TO BE HEARD, BUT NOT SEEN”