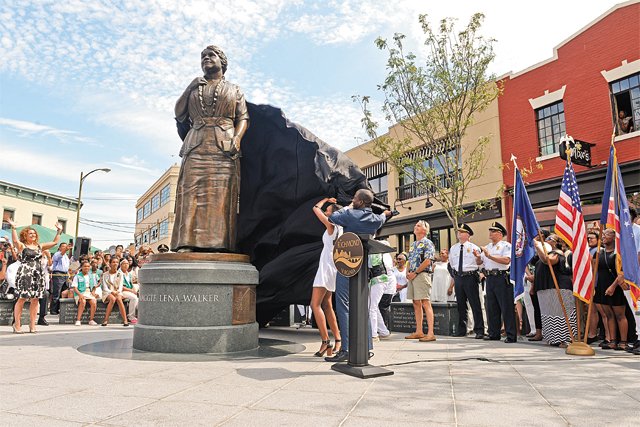 For our statues to have meaning, we must teach about the figures they represent

“But I thought Maggie Walker was a white woman,” the girl said to me. I was stunned, but told her, as gently as I could, “No, Maggie Walker was African-American.” I glanced down at the curriculum I had written. I needed to get my composure back, for this was the first day of a program I had developed for the Black History Museum and Cultural Center of Virginia, and I had 15 mostly African-American middle school teens from the Boys and Girls Clubs of Metro Richmond watching my every move.

I went on to talk about some of the obstacles that Walker, a banking pioneer and community leader, had to overcome while growing up — the loss of her father, growing up impoverished after the Civil War — and then moved on to the story of Oliver Hill. Another girl blurted out, “Oliver Hill is a white man.” When I tried to correct her, she countered, “Well, the Oliver Hill you know might be black, but the Oliver Hill I know is white!”

Clearly this was not going as I had planned. The curriculum called for teaching the kids about character and courage by examining the narratives of four heroes of history — Maggie Walker, Oliver Hill, Arthur Ashe and Barbara Johns — and putting cameras in their hands for a documentary that they would help to make. To introduce them to the stories of Johns and Ashe, I took them on a field trip. First, we went to the Virginia Civil Rights Memorial at Capitol Square, where they were able to interact with the life-size figures of those involved in the 1951 strike at Robert Russa Moton High School in Farmville — which included attorneys Oliver Hill and Spottswood Robinson, famed for filing the Davis v. Prince Edward County case that became part of the Supreme Court’s 1954 Brown decision outlawing segregation in public schools. The kids were especially drawn to the figure of Johns, with her hand uplifted as if “reaching for the moon.”

Next, we piled into the club van and rode down Monument Avenue, the children looking up at the grand Confederate monuments we passed. I wanted to tell the van driver to take another route, ashamed that my generation still allowed the vestiges of a bygone era to exist, exalted, on public land. When we finally reached

the Ashe monument in the West End, my facilitators and I had a bit of a time getting the kids safely to the statue, and we had to stand some distance away on a median, while I tried to speak over the noise of the traffic about Ashe — his role as educator, writer and human rights activist.

The program lasted for several months, and then the grant money ran out. That was nine years ago, and both branches of the Boys and Girls clubs I worked with have since closed. In the ensuing years, I have discovered that we often want to pay tribute to heroes, but sometimes fail to follow up with the programming necessary to disseminate the hero stories to those who need them most. The Barbara Johns story is seldom taught; Oliver Hill’s saga, last I heard, was buried in a fourth-grade curriculum; Arthur Ashe’s widow laments the fact that a new generation does not know who he was.

But things are changing, to be sure. A recently appointed commission is looking for ways to reframe the narrative of the Confederate statues on Monument Avenue. Last year, Gov. Terry McAuliffe appeared at the Virginia Civil Rights …