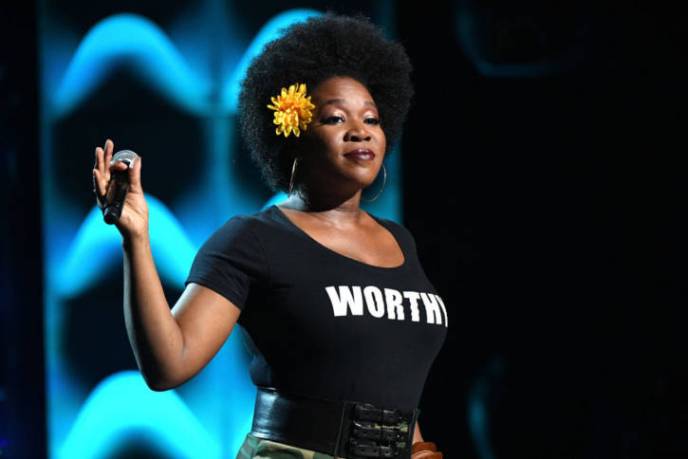 Her hair was big. Exposed. Natural. When India.Arie graced the 2017 Black Girls Rock! Awards stage for her performance tribute to legendary singer/songwriter Roberta Flack, a coily afro accented by a yellow flower crowned her head in place of one of her signature headwraps. Rocking a simple black statement tee that read ‘WORTHY’ in bold white letters, the shirt – from India.Arie’s ‘Worthy’ apparel collection launched in support of Black Lives Matter in 2016 – was arguably also an affirmation and declaration to and about its wearer; and a reminder to viewers.

She. Us. We are WORTHY, i.e., deserving of regard and respect.

Like the title of her 2005 single proclaims, India.Arie is NOT her hair. However, she is every bit the boldness, strength, and transformative Black Girl Magic-ness that her hair implies. And like hair, embracing the fullness of who she is has been a process of continuous shedding and growth over the span of her career.

For the last 20 years, India.Arie’s artistic mission has been, “To spread love, healing, peace, and joy through the power of words and music.” We know India.Arie as the Grammy winning, multi-Platinum selling artist and performer. But, when she speaks about the “I AM” of who she is foremost, she describes herself as a spiritual seeker, a lover of God and a student of life. Rather than being labeled by the perceptions and expectations of others, these days, India.Arie is clothed in the truth of her own self-defining.

It looks good on her.

After taking a four-year hiatus beginning in the fall of 2009, the Soulbird re-emerged in 2013 from what she thought would be her retirement with her fifth album, SongVersation. Named as one of Oprah’s inaugural SuperSoul 100 list honorees, Arie shared a ‘SongVersation’ – her meditative practice of storytelling, song, and fellowship –  with the masses during a moving SuperSoul Sessions talk.

Summer 2017 saw the release of SongVersation: Medicine, an eight song EP that expands on the original SongVersation. Consider this your 27 minute daily mantra set to music. “SongVersation: Medicine was made to be listened to in a quiet time, prayer, meditation, Yoga,” states Arie about the musical offering, “My wish is that these songs bring softness, clarity, calm, and inspiration.”

Please read original article- INDIA.ARIE’S JOURNEY TO ‘WORTHY’: “I’M GONNA BE ALL OF ME”

Continue Reading
You may also like...
Related Topics:India Arie