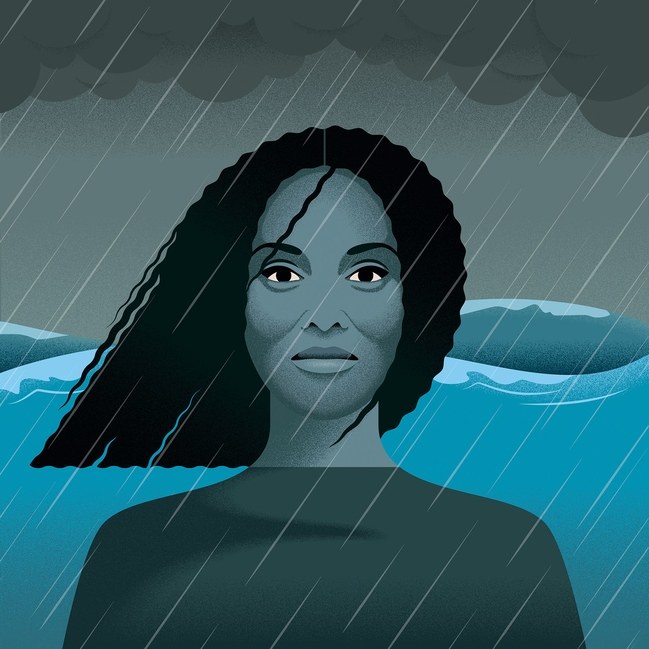 “Sing, Unburied, Sing” is shadowed by the long aftermath of Hurricane Katrina.

In the late summer of 2005, the novelist Jesmyn Ward, a native of the Mississippi Gulf Coast, lived through Hurricane Katrina. After fleeing her grandmother’s flooding home, Ward and her family weathered the worst violence of the storm huddled in trucks spread across an otherwise empty field. “I saw an entire town demolished, people fighting over water, breaking open caskets searching for something that could help them survive,” she said in a 2011 interview with The Paris Review.

Images like these, lately evoked again by the flooding of Houston after Hurricane Harvey, altered the course of American politics. Katrina was the definitive display of the unaccountable incompetence of the Bush Administration—and a stroke of racial catastrophe visible enough to catalyze, however subtly, the election of the first black President. Much as the 2008 financial crisis scrambled our political economy—yielding the Zuccotti Park occupiers who went on to wave signs for Bernie Sanders, as well as the intractable Tea Partiers-turned-Freedom Caucusers—Katrina radically reconstituted our understanding of race, place, and inequality. Activists and theorists who, since the nineteen-sixties, had insisted that the legacy of slavery and white supremacy was the interpretive key to America’s history now had a contemporary tragedy to point to as the proof of their case. As it does every generation or so, the idea of America as a vast conspiracy gathered fresh plausibility, and began, gradually, to make its way into the mainstream. Nine years later, in 2014, the killing of Michael Brown, in Ferguson, Missouri, gave national prominence to the Black Lives Matter movement; the young activists who led the protests had been weaned, politically, on pictures of an avoidable flood. Katrina brought into being a generation of justified pessimists.

It also helped create Jesmyn Ward’s art. Ward’s vocabulary tends toward the epic; she alludes to the Old Testament and Greek mythology with equal frequency and intensity; for her, Katrina is comparable in significance to the Egyptian captivity or the aftermath of the Trojan War. Only one of her books, “Salvage the Bones” (Bloomsbury), which won the 2011 National Book Award for Fiction, takes Katrina as its primary subject, but the storm lingers, ghostlike, in the others, operating as a grand, whooshing metaphor for the vulnerability—physical, emotional, environmental—of the residents of rural Bois Sauvage, the fictional Mississippi-coast town in which all her novels are set. In “Salvage the Bones,” a father struggles to fortify his home against the coming hurricane, but fails to notice the rise of quieter waters: his young daughter—the narrator, a bookish girl named Esch—is hiding a pregnancy; his son steals to feed the pit bull he is training to fight; his children are going hungry, foraging for eggs in the yard. The father’s single-mindedness is a product of memory: he witnessed Hurricane Camille, which wrecked the coast in 1969, and therefore understands Katrina as part of a foreordained sequence. For this modern-day Noah, the radio spouts warnings like an oracle. Ward tells the story with a tense patience, marking day after day; when the storm comes, overturning everything, it feels like a fatal relief. At least the waiting’s over.

“Salvage the Bones” expands our understanding of Katrina’s devastation, beyond the pictures of choked rooftops in New Orleans and toward the washed-out, feral landscapes elsewhere along the coast. Ward’s regionalism, grounded in rurality and in poverty, gives us the images—often beautiful, always barely hiding danger—that recur throughout her books: shushing pines; skin and garments red with mud; animals wild, domestic, or waiting for the slaughter. Siblings stand at the end of a road after the storm and look at the coast. All the remembered details—“the gas station, the yacht club, and all the old white-columned homes that faced the beach, that made us feel small and dirty and poorer than ever when we came here with Daddy”—have been ripped away and washed into the sea. “Not ravaged,” Esch thinks…

Continue Reading
You may also like...
Related Topics:Book, Jesmyn Ward