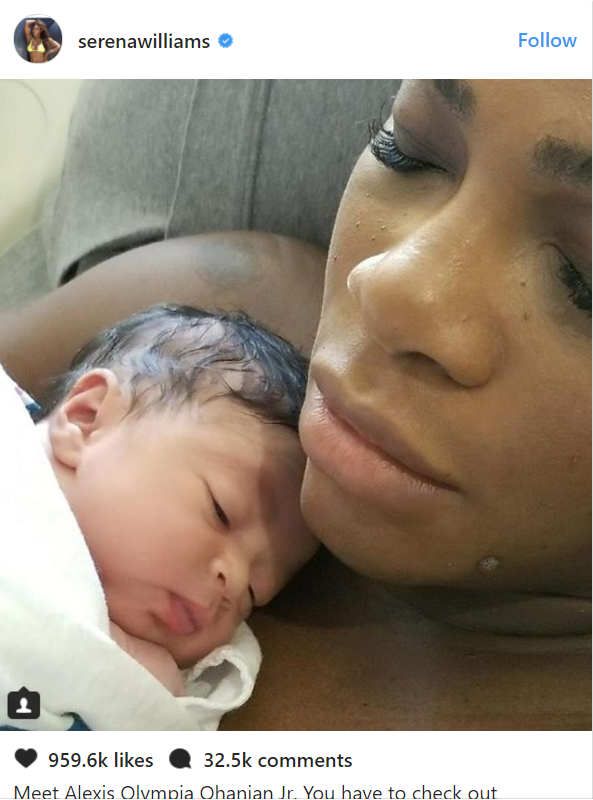 Now that Serena Williams has welcomed her first child with her fiance Alexis Ohanian, she’s clearly thinking about the world their daughter, Alexis, Jr., will be joining. It has inspired a beautiful open letter to her own mother, posted on Reddit, in which the superstar mused out loud about the challenges of raising a confident and supported black girl in a world that is not prepared to affirm her.

You are one of the strongest women I know. I was looking at my daughter (OMG, yes, I have a daughter ?) and she has my arms and legs! My exact same strong, muscular, powerful, sensational arms and body. I don’t know how I would react if she has to go through what I’ve gone through since I was a 15 year old and even to this day.

I’ve been called man because I appeared outwardly strong. It has been said that that I use drugs (No, I have always had far too much integrity to behave dishonestly in order to gain an advantage). It has been said I don’t belong in Women’s sports — that I belong in Men’s — because I look stronger than many other women do. (No, I just work hard and I was born with this badass body and proud of it).

But mom, I’m not sure how you did not go off on every single reporter, person, announcer and quite frankly, hater, who was too ignorant to understand the power of a black woman.

In a detailed (and must-read) analysis of the constant scrutiny Serena has had to endure — criticized for her body and choices, the cruel comparisons to other female athletes, the literal price she’s paid in terms of endorsements — writer Bijan Bayne makes it clear that race is central to this conversation:

What distinguishes Serena from other popular women athletes such as Patrick, Raisman and Sharapova is not accomplishment, controversy, the public stature of their respective sports or abilities as a spokesperson,” he writes. “Serena is Black, which carries the historical baggage of being invariably “othered,” hyper-sexualized, masculinized, demonized as “angry” or cast as unappealing to the mainstream.” In short, “The tiara of “America’s Sweetheart,” assumed by figure skaters Peggy Fleming and Dorothy Hamill, as well as gymnast Mary Lou Retton, has never rested on Serena’s head.”

And it won’t anytime soon.

In this, Serena is not alone. In a recent conversation about the difficulties that black women face in the professional sphere, Ibram X. Kendi, author of Stamped From The Beginning, The Definitive History of Racist Ideas in America, pointed to the ugly mix of race and misogyny that affects the way …

Please read original article – Serena Williams Talks About Race, Her Daughter and Asks For Help In An Open Letter On Reddit

Continue Reading
You may also like...
Related Topics:motherhood, Serena Williams