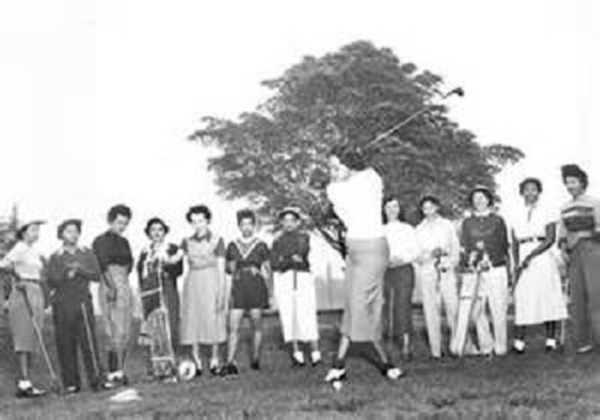 article by Kia Gregory via espn.com

The genesis of the Wake-Robin Golf Club can be told through members like Elizabeth McNeal. McNeal, 98, grew up amid seven siblings in Grindstone, Pennsylvania, where her father worked as a coal miner for 25 years before he moved the family to Washington to lessen the expense of housing the two older children attending Howard University.

Her father became a preacher, and as for her mother …

“There was nothing for women to do in those days but keep house,” McNeal said one recent morning, her days quieter now after suffering a heart attack last year.

The golf meetings began in the northwestern D.C. home of Helen Webb-Harris, a school teacher and a golf widow, the term for wives who lose their working husbands’ spare time to the golf course.

During the meetings, the young women reviewed literature about the rules of the sport. They also watched the women play on a nine-hole golf course, converted from an abandoned trash dump by the city.

“I think the main thing that made us go was that they were serving hot dogs and hamburgers and soda,” McNeal said with a laugh. “And we would jitterbug and then go home.”

Today, the Wake-Robin Golf Club is believed to be the oldest African-American woman’s golf club in the country. It was named after the purplish wildflower with gold stamens that sprouts in early spring. The resplendent flower symbolizes the club’s budding against the limiting thoughts, including of their husbands, of what women should and could do in the largely male, largely white male, world of golf.

During the Jim Crow era, some women of Wake-Robin putted onto municipally owned white-only golf courses, such as East Potomac, their presence a protest while crowds hurled racial slurs, rocks, eggs or golf balls at them.

“That didn’t stop us,” said Winnie Stanford, 94, a board member who is listed as a female legend in a United Golfers Association commemorative book. “If you make up your mind that you’re going to do something, you’re going to do it. Black women have always been strong anyway.”

The club, joined by its brother organization the Royal Golf Club, petitioned the federal government in 1938 to desegregate public golf courses in Washington, and was part of a movement of black golfers who pushed the PGA of America in 1961 to remove its white-only rule.

Despite the ebbs and flows of the sport, which some of the women of Wake-Robin see as suffering a decline, the club renews its mission year after year by drawing young African-American women into its fold.

“The challenges are society itself. There’s not an app for that, you know,” said Kimberly Robinson, the club’s president and a member for five years. “You got to put in your time out on the course.”

To read full article, go to: The oldest African-American women’s golf club in the United States

More in Butterflies in History