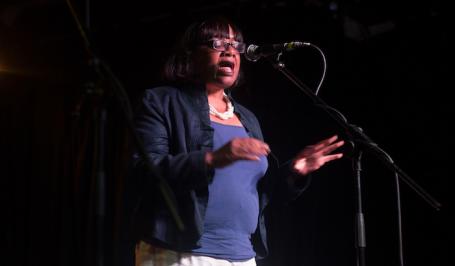 SUPPORTERS OF Diane Abbott, the first black female MP to be elected to Parliament, came together last Thursday to show her some love.

During the recent election campaign, Ms Abbott was the subject of widespread criticism following “car crash” radio and TV appearances on LBC and Sky.

The mother-of-one was then scheduled to give an interview on Radio 4’s Woman’s Hour, however, dropped out due ‘health reasons’ and was replaced by Shadow Foreign Secretary Emily Thornberry.

Many Voice readers have expressed their belief that she has long-been unfairly targeted because she is a black woman.

‘Abbott Appreciation’ started out as a hashtag, created by 22-year-old politics graduate Stephanie Ozuo, as a means of extending well wishes to the MP during a difficult period. From there, the idea came about to shift #Abbottappreciation offline, as it were, and launch an event. Working alongside Jojo Sonubi, Esinam Akpalu-Mark, Tramell Mugararua, Alexandra Ampofo, Alfred Afari and Jenna Davis, this came to fruition at The Queen of Hoxton, in Shoreditch.

“I decided to organise this event to show solidarity for Diane Abbott who’s had a hard time in the media recently. I thought it would be good to show her physical love, let her come down and see how much young black Londoners, and people from her constituency, love her.”

“It’s such a good time for young people to learn too. Big-up Diane but, also, let’s talk wider about why she’s important and how she got to be where she is.

Continue Reading
You may also like...
Related Topics:Diane Abbott